You are here: Home Why the 4% rule is actually (still) a decent rule of thumb

Recently, I found the BiggerPockets Money Podcast with financial independence enthusiast, financial planner, along with a host of other financial designations Michael Kitces very interesting.

For an hour+ the hosts of that podcast dove deep into the simple math behind the 4% safe withdrawal rate so many investors in the early retirement community rely on, and, why Michael Kitces ultimately believes the 4% rule actually remains a very good rule of thumb to plan by.

If you don’t have an hour and 22 minutes to listen to this episode (not many people do…) then no worries, I’ve captured the essence of the interview from this solid podcast below. Kudos to the folks at BiggerPockets for the deep dive.

Let me know your thoughts about the 4% rule in the comments section. I look forward to them.

In general terms, the “4% rule” says that you can withdraw “safely” 4% of your savings each year (and increase it every year by the rate of inflation) from the time you retire and have a very high probability you’ll never run out of money.

Some things to keep in mind when you read this: 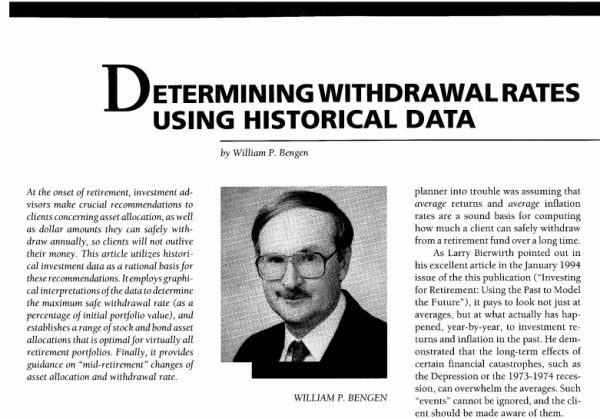 You can find the details of the report here.

2. This rule was developed almost 30-years ago. A lot has changed since then including real returns from bonds. There are also products on the market now that allow investors to diversify far beyond the mix of large-cap U.S. stocks and treasuries the Bengen study was based on.

3. The study was designed to answer the question: “How much can I safely withdraw from my retirement savings each year and have my nest egg last for the duration of my retirement?” Little else.

4. The study assumed (at the time) most retirees would retire around age 60. Therefore, a “good retirement” would be ~30 years thereafter; what is the safe withdrawal rate to make it through retirement until death.

5. The rule takes none of the following into account:

My wife and I aspire to have a paid off condo AND own a $1 M personal portfolio to start semi-retirement with in the coming years. We consider the 4% rule a decent starting point for our portfolio drawdown ideas but that’s where it ends for us.

Using that $1 M value, if we can grow our portfolio to that value, markets willing, the 4% rule tells us we could expect to withdraw about 4% of that million nest egg (or about $40,000 per year indexed to inflation) and have virtually no concerns we would run out of money for the next 30 years (mid-70s by then).

Still, does that 4% rule for any early retiree make any sense? Not in any practical terms.

To the podcast and my takeaways!

On the subject of a 4% withdrawal rate – is that conservative?

Michael: Yes. If your time horizon is 30-years, it probably is. Because, when Bengen looked at his different rolling periods…he found the worst case scenario was a withdrawal rate of about 4.15%. “It was the one rate that worked in the worst historical market sequence…”.

Does recent data say anything different since the 1994 study?

Michael: Not really. Michael and his team replicated the Bengen study and generally arrived at the same number. And that’s not the only good news…50% of the time using the 4% rule you will as Michael puts it “double your wealth”. So, 50% of the time (market returns willing) you will finish with almost X3 wealth on top of a lifetime of spending using the 4% rule. 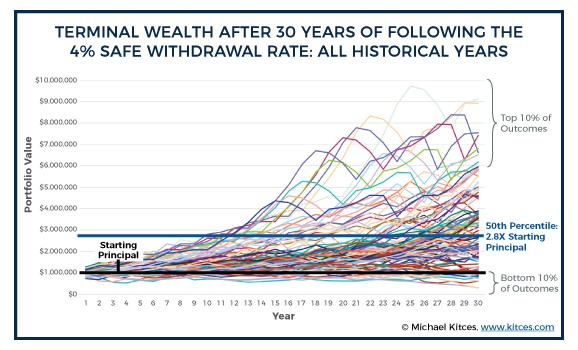 Check out the outstanding Michael Kitces study on the 4% withdrawal rule – that shows the extraordinary upside potential in sequence of return risk.

What if you retire at the worst possible time? Example, on the eve of the 2008-2009 financial crisis?

Michael: Doesn’t matter. 4% worked. Thanks to a massive bull run for the 10 years that followed, as bad as the 2008-2009 financial crisis was, you were still trending far ahead.

What if you want to FIRE (i.e., Financial Independence, Retire Early) – what is the safe withdrawal rate? (I don’t – read why here)

I prefer Financial Independence Work On Own Terms (FIWOOT) versus FIRE

Michael: You’ll need to go down to 3.5% rule. Why? The longer your retirement time horizon, the more you’ll need to pull down your “safe” withdrawal rate.

Is 3.5% a super safe withdrawal rate?

Michael: Yes, but he wouldn’t advise it. From a purist perspective, 3.5% withdrawals will work if you literally never make an adjustment. You could have retired on the eve of The Great Depression, coming out of the date withdrawing 3.5% and gone for 50 years, and you still had money left over at the end. Sure, there is always a risk that the future could be worse (series of market returns) than the investing past but nothing is a guarantee. The 4% rule is just ratcheting down to the worse case scenarios to be our baseline.

On the subject of a cash wedge…

FYI – here is my cash wedge approach or bucket approach: 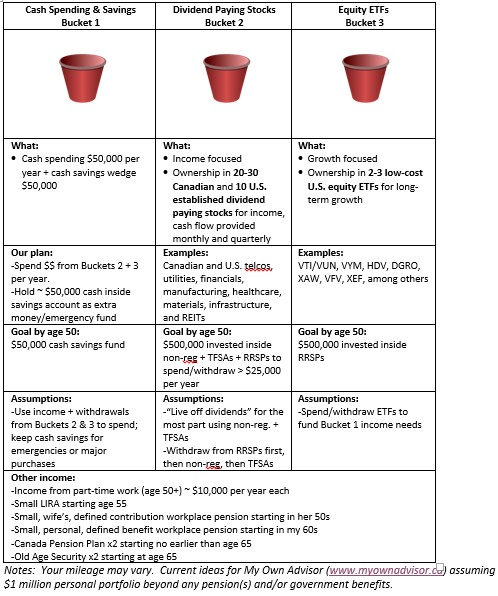 On the subject of a FIRE movement…

Michael: Kitces believes as I do that the “RE” part of FIRE is rather sensational. Again, nobody in their 30s or 40s really “retires” and does nothing for income for decades on end. They just spend their time differently (and good for them). He cited when he sees clients in practice, when they actually retire, he sees depression increase, isolationism increase, divorce rates increase. There’s actually “all sorts of bad stuff that happen after retirement”. The reason? You need a reason to get up in the morning and be productive. I would argue that’s just how humans are wired. Don’t fight it.

Summary on Kitces on the 4% rule

Overall, I enjoyed the podcast and will be happy to check out their work again in the future.

Kitces’ position on FIRE, having some cash but not too much, being willing to adjust your plans aligns to my DIY thinking and path. I won’t follow any direct use of the 4% rule myself. I’m likely to follow some sort of variable percentage withdrawal strategy. Essentially, spend more in good times and cut back during bad.

Check out this post on that subject here – the benefits of variable percentage withdrawal.

For further reading on the 4% rule including recent articles on my site, check these ones below. Using the 4% rule for your retirement plan might make no sense at all AND there are ways to retire early ignoring this rule altogether.

Let me know your thoughts on this subject.

Does the 4% safe withdraw rate still make any sense?

The proven path to early retirement ignoring the 4% rule