Welcome to my latest Weekend Reading edition…and yes friends…the Ottawa Senators are moving on!  Congrats guys and well played.  I look forward to cheering Ottawa on – winning in seven games against Pittsburgh.

Any NHL playoff predictions out there?

Here were my articles from this week:

A fan of my site shared this thoughts on balancing investment risks for rewards.

Apparently more rain is on the way this weekend for the Ottawa-area which is really putting a dent into my golf plans.  Hopefully warmer and drier weather is on the way…

Enjoy your weekend and see you here next week.  Thanks for reading and sharing.

Financial Samurai wrote about the downsides of being financially wealthy independent. 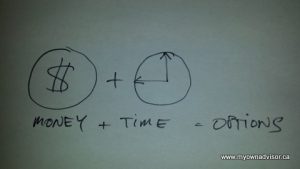 Interesting take from ThinkSaveRetire – this is money advice bullshit.  I tend to disagree with the 10% net income savings target.  Although it’s probably not enough to retire a millionaire it’s an excellent place to start. (Note: my 7, 10, 30 rule will net about a cool million over your working career (7% average return; investing $10,000 per year, every year, for 30 years).

Jason Zweig listed the other (big) reason why Warren Buffett has been successful.

This Star article listed some money tips from a millionaire.  Certainly investing your extra cash, maximizing your saving rate and reducing your expenses over time are huge enablers.  Alternatively just live in downtown Toronto or Vancouver.  Most of you are real estate millionaires in those cities.

Michael James on Money took issue with tweet showing how to become a millionaire by age 65; it included an assumption with a whopping 12% annual returns.

It was nice to see Sun Life, Enbridge and Telus all raised their dividend recently.  With those dividend increases we earned $80 in future retirement income, every year going forward, by doing nothing but staying invested in these companies.

Tawcan did the same thing here.

Big Cajun Man is annoyed with the complexity of the Registered Disability Savings Plan (RDSP).

Jordann Brown wrote a nice step-by-step guide to selling a car privately in Canada, based on her own successful experience.

Apparently more than half of Canada is $200 away from insolvency.  Scary stat but not surprising given our love of credit.