You are here: Home Weekend Reading – Wanting the market to crash, overspending, not showing up and more

Welcome to some Weekend Reading friends – the best from the personal finance and investing blogosphere.  Before I get to the articles I enjoyed this week, I thought I would show you some of the snow I moved this week. First, shovelling snow to get into my car at work. 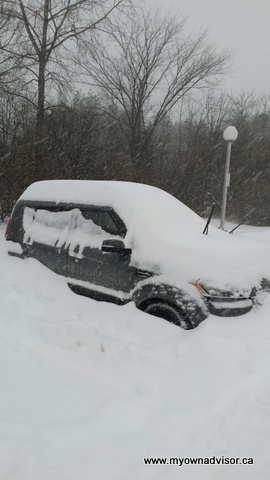 Next, shovelling my front step to get into my house. 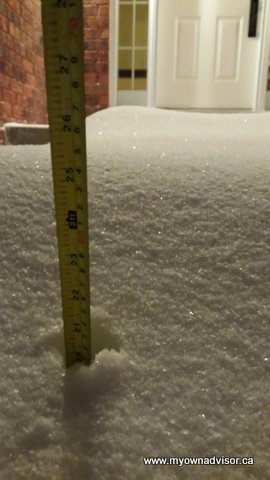 It was certainly interesting to get more than 52 cm (almost 2 feet) of snow in one day!

Back to the personal finance stuff, in case you missed it, I posted a few articles this week:

My TurboTax Canada giveaway with some great tax tips – so make sure you enter!

Andrew Hallam profiled this investor who wants the stock market to crash.  BTW – stay tuned for my upcoming interview with Andrew.  I recently got a chance to catch up with this Millionaire Teacher and Expat.

Here are some top Canadian dividend paying stocks to consider for your portfolio.

This couple featured in the Financial Post recently are overspending by $30,000 per year.

In 2004, the city council in Cadiz, Spain, put Joaquín García in charge of overseeing construction of a wastewater treatment plant, according to the Daily Telegraph. He visited the office, but finding no work and feeling bullied, he stopped showing up. And no one noticed. For six years.  He still got paid though. 🙂

Looks like Myrtle Beach is trying to lure Canucks south, taking the loonie at par.

GreedyRates lists the best credit cards for 2016.  Included in this list are credit cards that don’t charge a foreign exchange fee on top of your foreign currency charge.  I have one of those cards.

The Big Cajun Man wondered if you have a money buddy.

Our Big Fat Wallet shared some ways to use your tax refund this year.

Boomer & Echo is starting to think about his mortgage renewal.

Amber Tree Leaves was busy answering questions from his wife – about investing in the stock market.

The Simple Retiree reviewed The Essential Retirement Guide.  I’m reading this book now and I will be giving away a copy on my site soon so stay tuned.

Warren Buffett bought a boatload of Kinder Morgan stock this week, I’ll continue to hold my shares then.

I agree with Kyle Prevost that you don’t need gold in your portfolio.