You are here: Home Weekend Reading – Karlsson tweets, net worth is up and great blogs

During The Open Championship last weekend, Norris trophy winning defenceman Erik Karlsson and I were trying to figure out who might win that big golf tourney across the pond. 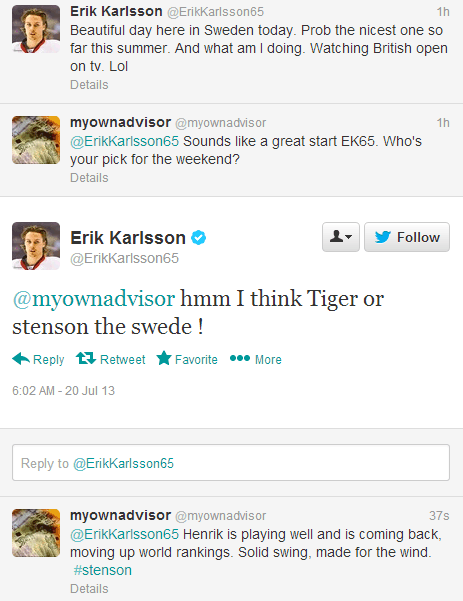 In the end, I was happy to see Phil Mickelson win in dramatic style.  Stenson is a great player, he might win a major yet Erik.  As for our/your Sens, I can’t wait to see EK65 and the boys back on the ice in the fall.  Sans Alfie, sadly yes, but we’re a younger and faster team because of Alfredsson’s departure to Detroit.

Speaking of Detroit, Alfie is going to have no problem affording a home there.  In case you missed it, check out my post here about some lessons learned from the #Detroitbankruptcy.

Canadians are apparently growing their net worth, now averaging over $400k, but I don’t like focusing on this metric for a few reasons.  For one, you can have that amount of net worth with a $400k mortgage on an $800k home (assets – liabilities = net worth).  I know that type of debt load wouldn’t make me feel very wealthy, the opposite in fact.

Ben Carlson wrote about the benefits of saving just 1% more.

Larry Swedroe on what we can expect from market returns going forward.

Money Bulldog wondered if you can afford a trip around the world.  Uh, no, I cannot.

Dividend Ladder listed some stocks for the long haul.

Kevin Press said the worst is over for the Canadian economy.

Dividend Guy thinks it might be time to focus on U.S. financials.

Michael James on Money wasn’t a fan of the mixed signals in this book.

I was disgusted to read about a broker in California that stole millions from two clients, one who had Alzheimer’s.  #sickpeople

Financial Highway offered all sorts of ways to get rid of debt.

Boomer and Echo offered some advice on investing in real estate.

Mr. Money Mustache gave us a tour of his house and provided some tips on how to retire young.

Big Cajun Man said you should treat personal finance like your next shot in golf, make it count.

Apparently Royal Baby Fever might be worth upwards of $380 million of stimulus to the UK economy.

Modest Money has some good content about starting a blog.