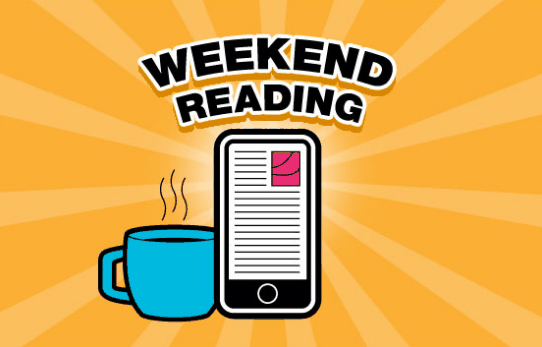 Many Canadian banks released their earnings this week and even though some profits dropped for some of them, dividends were up for most.  At the time of this post:

On that note, make sure you subscribe to my blog and continue to follow along – I’ve got more stuff to giveaway over the next few weeks and months.

Here are some articles I checked out this week, I hope you like them as well.

For the same book, Sustainable Personal Finance provided a nice review as well.

Retire Happy told us what you should not use RRSPs for.

Carl Richards told us why we fear simple money solutions.  I like Carl’s comment about how we often confuse simple with easy.  I’m definitely guilty of that one, in many of life’s aspects.

Dividend Ninja informed us where to hold our international dividend-paying stocks.

Freedom Thirty Five Blog is thinking like the rich.

Boomer & Echo told us about 3 credit card products you should avoid.

Preet Banerjee on WhereDoesAllMyMoneyGo.com had a great podcast with one reader who became a DIY investor.  His savings rate was outstanding.  Regarding the intro to the podcast, I actually liked the new speech synthesizer but without it, I do find Preet swears more often, so the synthesizer can’t really compete.  “A” for effort though.

The Dividend Pig said there are opportunities in the Canadian mining sector.

Canadian Couch Potato shared some estimates about future stock returns.  In Dan’s post he wrote:  “As of December, the data predict future real returns (after inflation) of 5.7% for Canada, 4.7% for the US, and 6.6% for international and emerging markets.”

The Big Cajun Man offered a few things to do with your tax refund.  I wonder what I’ll do with my $100?

Larry MacDonald told us a few things we do can with our RRSPs.

Michael James on Money had an interesting case study for managing RRSPs and RRIFs.

I enjoyed reading how one blogger turned his investments around.  Nicely done Eric.

My University Money had me at “beer”, as in the best discount beers in Canada.  He missed Maclays though.

Modest Money had the oddest financial claims of all time.