You are here: Home They want to spend $50,000 per year in retirement. Did they save enough?

They want to spend $50,000 per year in retirement. Did they save enough?

The “4% Rule” says they need $1.25 million. But do they really need that much?  This comprehensive case study will tell you the answer.

I suspect we all want some freedom to spend our days as we please.  For many of us, our goal is to save enough to sustain our lifestyle indefinitely.

So much do we need to retire?  The ‘ol 4% rule is a great starting point.

The 4% rule says that you can ‘safely’ withdraw 4% of your original portfolio each year, adjusted for inflation, for at least 30 years and have a reasonably high chance of having money left over. Based on the 4% rule, Michael and Julie would need 25x their annual expenses to retire early. If they want to spend $50,000/year in retirement they would need $1.25 million in retirement assets.

If $1.25 million seems like a lot (and it is!), some people go even further by targeting more conservative withdrawal rates of 3% or even 2%. At these low withdrawal rates Michael and Julie would need $1.67 million to $2.5 million in savings to retire early!

Do they really need that much?

When figuring out how much you need for retirement, spending is the most important factor. Mark wrote about that on his site many times including this article here.

Rate of return also matters. Less risky portfolios might fluctuate less in the short term but over the long term it has a big impact on your returns. A lower return means a higher risk of running out of money in retirement. It seems counter intuitive, but a less risky, more conservative portfolio can actually increase the risk of running out of money.

Access to government benefits is another big factor not captured in the ‘ol 4% rule. How much you qualify for will depend on your personal situation, how much you’ve contributed (when it comes to our Canada Pension Plan), how long you’ve been living in Canada (when it comes to Old Age Security), and if you’re single or a couple.  Don’t kid yourself – government benefits in Canada can be substantial and ignoring them can make things unnecessarily difficult when planning for retirement!  As a rule of thumb, an average couple can expect to receive about $30,000/year, or $15,000 each, in government benefits if they start those benefits at age 65.

Tax efficiency plays another big role. Having 100% of your retirement assets in your Registered Retirement Savings Plan (RRSP) creates a huge tax burden (not to mention it can make you ineligible for many government benefits). Remember, the RRSP is a tax-deferred account and withdrawals are included in your taxable income.

Can you have too much money in your RRSP?

Using a mix of both the Tax Free Savings Account (TFSA) (tax-free withdrawals) and the RRSP (tax-deferred money) provides the flexibility to reduce your income taxes in retirement which will decrease the amount you need to save.

Getting back to Michael and Julie, who want to retire at age 55 and spend $50,000 per year, having just under $1 million is probably more than enough.  Yet let’s see how their expenses, benefits, taxes and other factors play out from age 55 to 100, to see if their savings are actually enough. 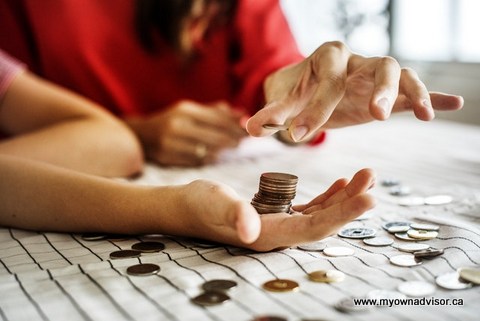 Did They Save Enough?  The Assumptions…

Michael and Julie are looking to retire 20 years into the future when they’ve both reached age 55.  We’ve already mentioned they want to spend about $50,000 per year in today’s dollars.

By age 55 they’ll have saved $994,329 in retirement assets, in today’s dollars, plus an emergency fund equal to 12-months expenses. In building this near $1 million portfolio they’ve been smart to max out their TFSAs every year since inception, so it now contains $570,623. The remaining $423,706 is in their RRSPs. Overall their portfolio has a 70/30 mix of stocks and fixed income. We’ll assume a 6% rate of return on stocks and a 2.5% rate of return on fixed income.

Michael and Julie will also have a house worth $600,000 in today’s dollars, which by age 55, will be mortgage-free.

For our calculations I will assume they both started their careers at age 25 and have maxed out their CPP contributions every year.  Because they’re retiring at age 55 they’ll only have 30 of the 40 years required to receive the maximum from CPP.  (They’ll receive more than the average but nowhere near the maximum benefits.)

At age 80, Michael and Julie anticipate their spending will decrease by $10,000/year as travel and activities slow down. They also plan on selling their home around this age and moving into an apartment or condo to rent.  I’ve also assumed in doing so that will add $30,000/year to their expenses but don’t forget, they’ve freed up almost $600,000 in real estate assets (minus 5% transaction fees).

Again, lots of assumptions here but for the purposes of spending $50,000 per year, with almost $1 million in financial assets, a paid off home, at age 55 will Michael and Julie have enough?

Because all their retirement savings are inside registered accounts such as their TFSAs and RRSPs, Michael and Julie have a lot of control over withdrawals. This flexibility will let them reduce taxes and optimize government benefits like CPP, OAS, and GIS.

(For a complete summary of their withdrawals please see the charts below. All charts are in today’s dollars.)

To start, Michael and Julie will withdraw just enough from their RRSP to maximize the basic tax exemption, the rest of their income will come from their TFSA. This mix of RRSP and TFSA withdrawals (with no other income sources) will help them pay virtually zero taxes for the first 15 years of their retirement.  This will take them from ages 55 to ~ age 70.

But that’s not all, there are two other ways they can optimize their taxes and benefits during retirement.

The first is to reduce their taxable income between ages 64 and 71 by drawing primarily from their TFSAs. By starting OAS at age 65, but delaying CPP to age 70, their TFSA withdrawals will allow them to be eligible for GIS, GAINS, GST and Trillium benefits – since TFSA income is not income-tested.

The second way they can optimize their taxes and benefits is to slowly shift their RRSPs into their TFSA each year. By taking advantage of the lowest tax bracket, they can slowly draw down their RRSPs at a low tax rate and shift these investments into their TFSA. Moving money into their TFSA makes these funds easily available in the future and reduces the taxes on their final estate.

These are some of the retirement income planning considerations Mark wrote on his site here.

Optimizing taxes and benefits will add a total of $134,780 to their retirement income and will reduce the final taxes on their multi-million-dollar estate to just $25,989. Planning withdrawals in this way will also help grow their net worth over time.  For the first 10 years of retirement their net worth will decline slightly as investment returns struggle to keep up with withdrawals and inflation.  However, once their government benefits kick in, their net worth will begin to accelerate, leaving them plenty of cushion in their 70’s, 80’s and 90’s.

So far, even with a 5%+ withdrawal rate, things look very good if not great for Michael and Julie!

Check out their net worth!

Mark’s editor’s note – it looks like they could spend even more than $50,000 per year…look at those TFSA assets!  Read on*

One Last Thing – It’s All About Timing*

You have to admit, their retirement plan looks great on paper, but there’s one problem.

We’ve used a constant rate of return for stocks and fixed income, which isn’t very realistic.

To be more realistic, we should accept Michael and Julie will face unpredictable short-term returns. If they’re really unlucky, they may retire right before a huge recession, which could decimate their retirement portfolio.  Ask retirees about 2008-2009, they will tell you all about it!

To be confident in their retirement plan we need to look at their unique income requirements over multiple historical scenarios.

Timing of investment returns (and retirement withdrawals) will have a BIG impact on the sustainability of their retirement portfolio. A few bad investment years early in their retirement can be very detrimental. This is called sequence of returns risk.  Ideally, ‘surviving’ the first 5-10 years in retirement without a major portfolio crash is what Michael and Julie should hope for, but nobody knows what the future holds!

Sequence of returns risk is especially important for Michael and Julie because they need to sustain themselves entirely on their own retirement savings for 10 years before government benefits start kicking in at age 65.  Their withdrawal rate during that time will be above 5%, which is quite a bit more than the recommended 4% ‘safe withdrawal rate’.

Luckily, they don’t need to sustain that withdrawal rate forever. Once they reach age 65 their withdrawal rate drops dramatically as Old Age Security (OAS) and other government benefits kick in. Then it drops again at age 70 when their Canada Pension Plan benefits begin.

You can read more about when to consider deferring your CPP benefit here.

Over every risk scenario I tested, they have a 100% success rate. Historically, their worst year would be equivalent to retiring in 1929. Faced with this situation their portfolio would drop by more than two-thirds (!) over the next 10 years before government benefits kick in at age 65, but their portfolio would recover.  Even though those first 10 years would be hard to stomach, they’re very successful! 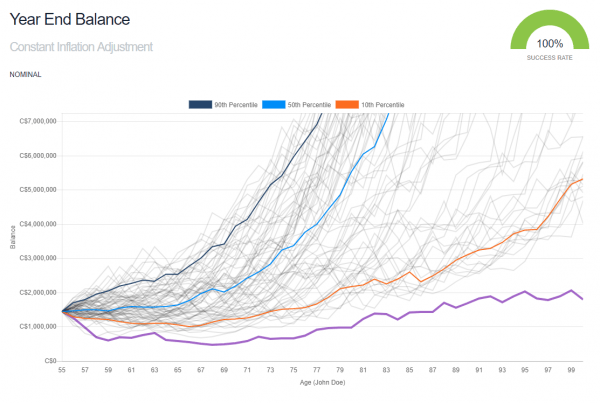 Did They Save Enough?

You bet they did, and then some.

Michael and Julie can retire with just less than $1 million in the bank while still spending $50,000 per year. They can enter their retirement knowing that they’ve saved more than enough to sustain themselves for 40+ years. In the process we’ve helped them gain almost $135,000 in benefits and reduce the income taxes on their estate to nearly zero.  Most importantly though, we’ve helped them gain confidence in their retirement plan so that they can stop worrying about saving more money and start spending more time on the things that really matter.

Thanks to Mark and his site for allowing me to share this case study with you. Again, lots of assumptions here but I hope it has been beneficial to see how much you might need to save for your situation, how you can maximize the benefits of the TFSA and RRSP for retirement, and what tactics you can take (with government benefits) to reduce your tax burden while maximizing the longevity of your own personal assets.

You can find more retirement essays from folks that have successfully “been there, done that” on this Retirement page here.

Owen Winkelmolen is a fee-for-service financial planner (FPSC Level 1) and founder of PlanEasy.ca.  He specializes in budgeting, cashflow, taxes & benefits, and retirement planning. He works with individuals and young families in their 30’s, 40’s and 50’s to create comprehensive financial plans from today to age 100.

Get a FREE insurance quote!