You are here: Home Reasons to buy a used car instead of a new car

Reasons to buy a used car instead of a new car

If you’ve been reading my site for any length of time you’ll know I’ve proudly owned this 16 17-year-old car. 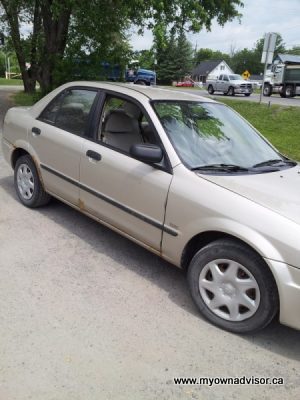 Recently this beauty gave me trouble.  After driving over a speed bump (maybe too quickly?) on the road to my golf course, I broke part of the axle and other joints associated with my right rear tire.  The right rear tire almost fell off.  I wasn’t going very fast actually but I guess the corrosion that built up within the car over the years finally gave way after one big bounce.  My mechanic informed me the cost of replacing everything and making the Protégé roadworthy again would be < $700.  However this car is only worth about $1,000, maybe.

Would it make sense to fix it and keep it?

I had a decision to make:

After thinking it through we landed on Option 2.

My wife and I have been planning for this day for a few years now – we’ve been saving up for a new(er) car for the last year or so – that was one of our 2017 financial goals.  In addition to that we have an emergency fund.  We have such a fund for the “what ifs” in life.  A destroyed right rear tire where I can’t drive the car more than 20 km/h was deemed somewhat of an emergency.

Besides having enough money to pay for the newer car in cash here are the other reasons we decided to buy a used car instead of a new one.

New cars, driven off the lot, can depreciate by as much as 20% in value.  To put that in perspective that means on a $25,000 new car purchase that’s like taking $5,000 out of your bank account and burning it in a summer camp fire.  I don’t think so.

It would be hard to beat the rock bottom, no collision insurance rate I had with the 2000 Mazda Protégé but with some research I confirmed a 2-3 year old car is a nice “sweet spot” for lower insurance rates over new cars.

Until you go used car shopping I suspect you have no idea how much choice there is for your price point.  There are literally hundreds of used cars within a short drive of my place; cars from large-volume dealers to auctioneers and small entrepreneurs.  Although no used car can be made to order there is certainly a bounty of choice in the used car market.

The safety ratings on most cars have increased dramatically since I purchased my car 17 years ago.  Beyond that, you’ll find many used 2-3 year old cars have a good portion of their bumper-to-bumper and/or powertrain warranty intact.

We also decided to go newer with a particular car for these reasons.  Your mileage might vary.   I will reveal the car below…

Why go with this used car? 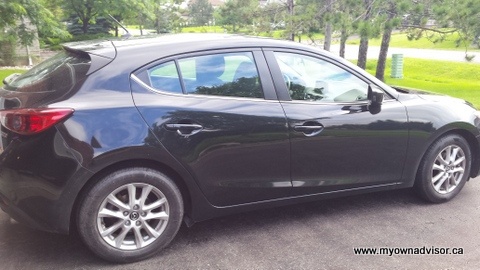 We purchased the car with around 50,000 km on it and a clean CarProof bill of health with only one previous owner.  It has some nice creature features like a sunroof.  Although I had little price negotiation room on this car (I certainly tried!) I did manage to get winter tires on rims with it, new summer tires put on the existing alloy rims, and new front and back WeatherTec mats installed.  What is old is newer again – one Mazda for another.

I was inclined to keep my old car until I drove it into the ground.   Mission accomplished I guess – the ground/speed bump won a couple of weeks ago.

Keeping my old ride for many years had a number of benefits.  I hope the same can be said in another 10 years with this newer car.

What do you make of my used car purchase reasoning?  What would you have done?