You are here: Home Passive and active investing can exist in retirement harmony

Passive and active investing can exist in retirement harmony

Dividends do not matter.

The best way to invest is via low-cost funds that track a reputable index.

If was given a nickel every time I heard some of these phrases, I would be ridiculously wealthy.

The fact of the matter is, personal finance is personal.  If you feel otherwise, this site is not for you!

For example, some investors like the “optionality” that dividend income provides from investing in dividend paying stocks from Canada and the U.S.  I am one of them.

In fact, much to some financial experts displeasure, I intend to “live off dividends” to a degree, and I’ve listed a few reasons why here.

This does not mean I’m against owning low-cost financial products that offer additional diversification through ownership in many companies, within many sectors, from many geographic areas around the world.

Low-cost ETF or fund investing is generally good for investor because it can decrease an investor’s portfolio risk – depending on what they own of course.

Therefore, some passive and some form of active investing through some buy-and-hold stock selection can work well for investors long-term. It doesn’t have to be all or none.

I’m definitely not the only investor that feels that way – enter in financial writer, author, Victory Lap semi-retiree Jonathan Chevreau. 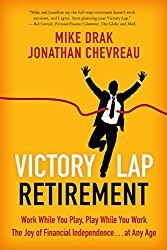 Passive and active investing in practice

I got a chance to chat with Jon recently about his investment journey over the years, leading up to how he invests today and why in his sixties, and his thoughts/advice for folks on the FIRE (Financial Independence Retire Early) movement.

Jon, thanks for coming on the site.

My pleasure Mark.  I enjoy following it.

Jon, tell me about your career.  I really only know you as a financial writer, author and now blogger running your Financial Independence Hub.  What was your career and when do you get started with investing?

My formal post-secondary education began with studying science at the University of Toronto, and then I went to grad school for my Masters in Journalism (University of Western Ontario, MBA 1979). Based on that academic start, it seemed natural to start my journalism career as a tech reporter. After a few years in the trade press, the Globe & Mail (G&M) hired me as their (first!) high-tech reporter, but I quit after four years, went freelance and tried public relations.  I ultimately re-entered journalism at age 40 with the Financial Post.

I gradually lost interest in high-tech as a journalistic topic and shifted to personal finance at the Post, first via a mutual fund column and the annual Smart Fund books I co-authored between 1995 and 2000. I didn’t really think much about money until I left the G&M (in 1984) and took the commuted value of my defined benefit pension – that became my first RRSP contribution at age 31.  I was married, had the mortgage, had my kids (only one, actually) by my mid-30s.

Did you have a money mentor?  If so, who?  Who told you to invest like you did?

Not initially. I stumbled into an Equion free financial seminar early on and ended up in a bunch of deferred sales charge (DSC) mutual funds.

(Mark – I’ve written about those terrible products, thankfully they are slowly dying off, albeit with some kicking and screaming…)

Eventually I decided the very title Smart Funds was an oxymoron, at least as it pertained to high-fee retail mutual funds. More aware, I later switched to a commission-based advisor with more of a focus on individual securities: Pat McKeough, now of The Successful Investor, but he got out of the business to start his newsletters and investment counselling firm.  So, I used his successor at the brokerage of the time, and ultimately ended up with the person I use now: a true fee-for-service financial planner who taught me how to become a DIY investor and open and manage discount brokerage accounts. I still use him today, but he prefers not to be publicized.

Your journey does not seem uncommon for folks who grew aware (and smart) that high-fee fund products are not in the best interests of investors.

That brings me to this:  index investing using low-cost, broadly diversified Exchange Traded Funds (ETFs) has emerged to be great way to invest.  What’s your take?  Do you feel that way?

Yes, for sure Mark.

I’ve invested in many ETFs.

My 1998 book The Wealthy Boomer: Life After Mutual Funds was one of the first Canadian books critical of high-fee funds, and among the alternatives it surveyed was a section on indexing written by a co-author, before ETFs really took off.

Initially my idea personally was to use ETFs to invest where I didn’t have any knowledge: EAFE and Emerging Markets, and small- or mid-cap North American stocks; like you, I figure I can invest directly in the household-name U.S. and Canadian large-caps, dividend payers and FANG stocks (Facebook, Amazon, Netflix, and Google).  That early tech career probably influenced me there.

I still use ETFs to drill down on certain sectors where I really don’t know the secondary and tertiary players: cloud stocks, for example, or biotech. And lately, I have started to retrench and invest in the Vanguard asset allocation ETFs in preparation for when I go ga-ga in old age. The ultimate danger is to become a Destroy It Yourself investor and I figure the Vanguard asset allocation ETFs will protect me and my wife from that in old age.

You can read more about some of the Vanguard all-in-one funds, along with iShares and BMO products now available for investors – to make investing super simple – here.

Jon, you might already know I’m a hybrid investor.  That means I invest in many individual dividend paying stocks for income AND I use a few low-cost U.S. ETFs for extra diversification.  With all the chatter that dividends do, do not matter and beyond – what are your thoughts given your experiences and what you currently invest in?

In fact, here is one of my recent dividend income updates – highlighting my progression over time thanks to sticking with a plan I believe in. 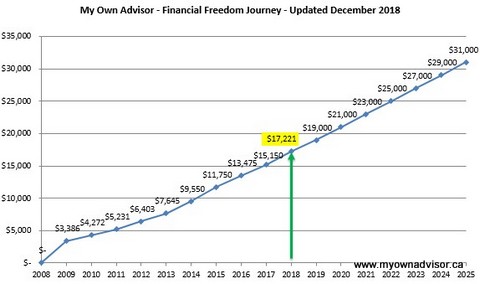 I use a quite similar hybrid strategy, even though I have a few years on you.

My feeling is you don’t need an ETF to invest in the big Canadian banks or Google, Microsoft, Apple and the like, and you may as well save a bit of management expense ratio there.  As I said above, eventually I will fire myself on the individual stock or bond front and rely mostly on asset allocation ETFs and maybe some GICs if they ever start to pay a decent real return.

I’ve written about the clear lack of consensus on any retirement withdrawal strategy.  Rightly so, since I believe personal finance is personal.   What’s the order of your portfolio drawdown plans to derive your necessary retirement income?  Why?

I’ve written about the three major packages I’ve played with in the last year or two on my site:  Cascades, ViviPlan and Retirement Navigator.

For my wife and I, they tend to suggest:

Based on my own assessments, we’ll probably do a bit of both (registered and non-registered withdrawals) in the next five years approaching age 70 to “top up to bracket” so each of us deregisters from RRSPs enough to receive the lower-taxed dollars (i.e. anything less than 46 to 50% top marginal rate) while falling just below the Old Age Security (OAS) clawback zone.

Mark – here are some facts about Old Age Security you need to know.

Depending on growth, it’s likely that as the Registered Retirement Income Fund (RRIF) withdrawal minimum rises in one’s 70s, that eventually the OAS clawback will rear its ugly head. And despite all the attention lately given to middle-income seniors qualifying for the Guaranteed Income Supplement (GIS), I don’t think the game is worth the candle of restructuring everything for 5 or 6 years of possible GIS payments that in any case weren’t really intended for people like us.

Sounds prudent Jon.  Any thoughts on the FIRE movement?  I’ve determined while FI (Financial Independence) appeals to me greatly, I couldn’t care less about the RE (retire early part in the traditional sense).

Like several other Canadian financial bloggers, including you I know, I’m a bit skeptical about the kind of FIRE described by many American FIRE blogger-millionaires (or “thousandaires.”)

At 66, I’m financially independent but still not fully retired, so I can’t claim to have been an early retiree. And I don’t believe FIRE bloggers in their 30s are retired either: they’ve merely left corporate employment and wage slavery and exchanged it (at least some of them) for an entrepreneurial career that makes money by selling the FIRE dream: typically by monetizing their blogs, writing books and maybe holding seminars telling everyone “how they did it” at such a tender age.

Like you, there is nothing wrong with the FI part of the acronym (Financial Independence or what I call Findependence), but the RE (Retire Early) part of it is a bit of a stretch. No one should “retire” in the classic sense in their 30s: they can shift careers, go back to school, become philanthropists or whatever but even though you can now watch streaming services 24/7 I don’t think that’s what life all is about. While it doesn’t make for as snappy an acronym as FIRE, I’d describe my approach as Semi-Retired, Work Optional.

Closing thoughts Jon.  Any mistakes you want to share and what aspiring retirees should avoid?

Mistakes, I’ve made a few! Bought Apple early around the time of the iPod and sold it way too early. Should have remortgaged the house and backed up the truck to buy Microsoft when they were a client in the 1980s and I first saw the Windows 3.0 sneak preview. Tons of stuff like that but that’s an all-too-common story.

I’d advise aspiring retirees to first figure out what it is they think they’re going to retire to: just “escaping” work is not a sufficient reason to abandon a career and the job market. You should have a good handle on your most significant life partner and whether you’ll be on the same page together in retirement: finances, travel, family, hobbies, etc. Finally, realize that money is only one aspect of retirement: just as important are health, hobbies, community, spiritual life, family and the whole package.

With various income streams, using a blend of passive and active management approaches, and some sensible forecasting towards the benefits of asset allocation ETFs, Jon seems to be enjoying his victory lap retirement after a well-earned full-time career.  Congrats Jon – thanks for being on the site and sharing your thoughts.

Look no further than this dedicated Retirement page on my site to learn more, save more and tailor your own financial independence path.

Thanks for your readership.