You are here: Home Interview with Robert Brown – Head Rabbit – Wealthing Like Rabbits

A couple of days ago I told you these are great and glorious times to be an investor, including a millennial investor.  Never before has a diverse menu of lower-cost financial products and services been made available to the masses.  We have millennials to thank in part for that.

A couple of years ago, a fine introductory personal finance book was released entitled Wealthing Like Rabbits by author Robert Brown – a review you can read here.  In addition to that post here is what I said about Rob’s book, along with other bloggers and writers: 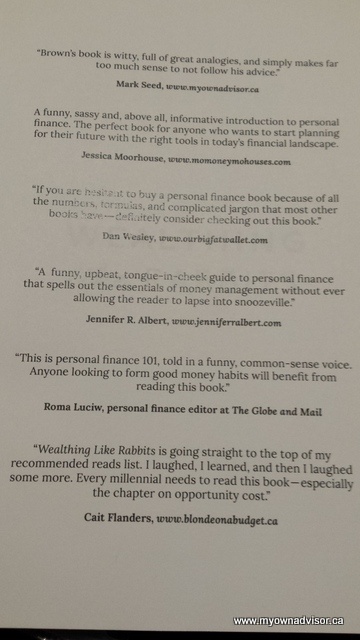 The Canadian Personal Finance Conference in Toronto last month was a nice opportunity to see some old friends and create new ones – including finally meeting Rob in person.  Over lunch one day, I was curious to find out how Rob’s fall speaking tour of Canadian universities and colleges was going with millennials, what he learned from them and what takeaways he might have for the rest of us on our financial journey.

Here is my interview with the head rabbit of personal finance, Robert Brown…

Rob, great to finally meet you in person at the Canadian Personal Finance Conference in Toronto – thanks for doing this.

No problem. One of the great things about event like the Canadian Personal Finance Conference is that you get a meet a lot of people that you had previously only met through e-mail or the Twitter machine. I like Twitter as much as the next guy but it’s pretty hard to replicate of experience of enjoying a beer with a friend in a tweet.

Wealthing Like Rabbits (WLR) has been out for a couple of years now.  Any key messages you’d like to change since the book launch – why or why not?

Not really. When I wrote WLR I really worked hard on making it about the fundamentals; Save some money, pay yourself first, stay out of dumb debt, spend consciously and don’t worry about keeping up with the Joneses. Those messages were valuable thirty years ago, I think they’re still valuable today and I suspect they will be valuable thirty years from now. That said, I update (tweak might be a better word,) whenever appropriate like when the current government changed the TFSA contribution limits. I also added a little section endorsing the “robo-advisor” investment model to readers. It’s funny, I wrote WLR between 2012 and 2014 and at that time there were no robo-advisors in Canada. Now there’s something like twelve. Shows how fast the industry is changing.

I’ve been following your tour of various universities and colleges this fall – talking to millennials about money.  Talk to me about this tour.

It’s been an absolute blast. I’ve been lucky enough to talk at 22 colleges – universities from Charlottetown to Winnipeg. Getting and talking to millennials about money just seemed like a natural next step after getting the book out there. A lot of the material in my presentation is driven from WLR but I also talk a lot about how the “personal” part of personal finance is as important than the “finance” part, probably more. I focus on three things. 1) Stay out of dumb consumer debt. 2) Be committed to a long term saving plan. (I recognize that this may be hard to do while in school but one of the things that students can do to enable them start saving as soon as possible after graduation is to…stay out of dumb consumer debt!) and 3) Screw the Joneses! (Don’t worry about keeping up with the Joneses.)

What are the top millennial money concerns – what themes arose?  Why are they concerned?  Should they be concerned?

Student debt is a big concern but also a lot of students also worry about being able to find secure employment as opposed to contract work after they graduate. If I’m speaking in the GTA, housing is a monster concern and I’ve been impressed by how many students realize they might be better off with a lower paying job…outside of Toronto. I haven’t spoken in Vancouver (YET!) but I suspect the same is true there. Lastly, I’m surprised by how many students are taking an interest in learning about money because they want to avoid the mistakes they say their parents made. I was talking to a young man in Ottawa who was holding down two part time jobs while attending Carleton because his parents were STILL paying their student debts and he was determined not to follow that “shit-show.” His words, not mine but I liked it.

Like I mentioned above, I recently posted an article on my site about the “glory age of investing” – thanking millennials – providing some advice.  What key money advice did you share with millennials on this tour?

Outside of the subjects I mentioned above, I encourage students to consider how their attitudes and actions today, will influence their situation in the future. In personal finance circles we often encourage people to be patient and think long term, which is great advice but good long term strategies also involve the right attitudes and behaviors now. Also, the whole Joneses thing. I really encourage students to make decisions that are in their best interest without worrying about anyone else.

What did you learn about yourself during this tour Robert?  Anything the millennials taught you?

In the final chapter of Wealthing Like Rabbits. I wrote a bit about how the millennial generation often isn’t treated very kindly by the media, in fact they are “often dismissed as being shallow, disengaged and pretentious.” For me, this fall’s “tour” absolutely reinforced how wrong that sentiment is. I wrote in WLR that this generation, like those before them, “aspire to a comfortable financial future balanced against their needs and wants of today.” (Author-brag, I love that line.)  I think I understand that more now than I did when I wrote it.

If you could share just one suggestion, to anyone including millennials, how people could improve their financial well-being in 2017 what would that be?

Well said Rob, and another reminder that while the math with money is important, so are your attitudes and behaviours with it.  I want to thank Rob for this update and I wish him all the best for 2017.  Stay in touch!

Further reading on my site?

Attention Millennials – Here is your game plan for retirement.

Download this free copy of If You Can – how Millennials can almost guarantee they get wealthy eventually.

What questions do you have for Rob Brown or myself?  Send them my way!