You are here: Home How to build a million dollar portfolio

How to build a million dollar portfolio

They say a million dollars isn’t what it used to be.  Fine. In my book though it’s still a huge pile of money.  Beyond inflationary pressures, workplace pensions disappearing over time.  This means you’ll need to rely on you to fund a secure retirement.

Whether you’re just starting out your career as a 20-something or you’re coming in late to the retirement-saving-party, there are different ways to build a magical million dollar portfolio (or close to it).  Let’s see two examples today.

Regardless if you have a workplace pension or not, I believe all Canadians should know about two key accounts they can use to save for their retirement:

While both accounts have the word “savings” in them don’t let that confuse you with how they work and how both accounts can be used to build your million dollar portfolio:

With those sets of reminders about the powerful tax-deferred (RRSP) and tax-free (TFSA) nature of each account, let’s look at how to build that healthy retirement nest egg.

I believe an early and consistent stream of contributions to the RRSP will work out very well for the majority of Canadians, hopefully myself included!  While contributing to the RRSP makes the most sense when your marginal tax rate at the time of contribution is greater than your marginal tax rate at the time of withdrawal, this doesn’t mean the RRSP cannot be used by lower to middle-income Canadians or individuals just starting out their careers – although the TFSA may be more beneficial from a future tax perspective.

Let’s use 20-something Saver No. 1 in my post today Early Earl as an example: 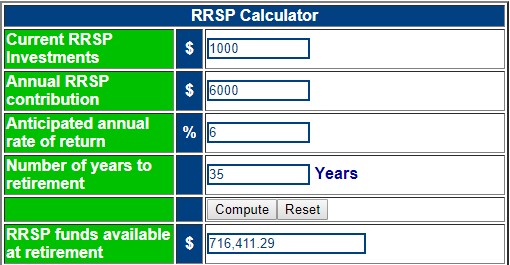 Early Earl will have, roughly, just over $700,000 inside his RRSP at age 60.  Pretty good!   This is not a million dollar portfolio you might say.  Very true – but my calculations above ignore other factors that could help Early Earl (and his future family) reach a million dollar target.

Now, when I was 25, I wasn’t yet saving $500 per month (I recall I was saving at least $100 per month though) so let’s look at another, potentially more realistic example for younger works and savers.

We’ll call Saver No. 2 in my post today Late Lorraine.

Lorraine has already been reading My Own Advisor for many years now so she already knows about the value of low-cost Exchange Traded Funds (ETFs) for investing; she knows to keep her financial costs low; she understands the power of long-term growth and invests in mostly equities; she knows she needs to make regular contributions to her RRSP and/or TFSA; she has learned to avoid all the talking heads on TV about Bitcoin; the list goes on…

Lorraine was busy having fun in her 20s, finishing her degree; did some travelling (can’t blame her) and waited until her early 30s to get married to her long-time boyfriend from university.  She bought a house in recent years and has started to raise three beautiful but very energetic young boys!

With mortgage payments now well in hand, Lorraine (now 35) along with her husband want to get serious about saving and investing for retirement.  They want to retire by age 60.

Although Lorraine has only $50,000 in her RRSP, with a revised spring budget that involved cutting out lots of financial waste around the house, she and her husband estimate they can start socking away a cool $1,000 per month for their retirement.  Great work!

Lorraine decides to start contributing to her TFSA (she has $0 in that account) but knows with a decent paying job she should also maintain contributions to her RRSP ($500 per month).  (She has no workplace pension.)   Her husband might also save some money in future years but he’s a largely stay-at-home-Dad who does some consulting work from time to time so we’ll just focus on Lorraine.

Here is what her savings could look like by age 60 assuming 6% rate of return for the RRSP: 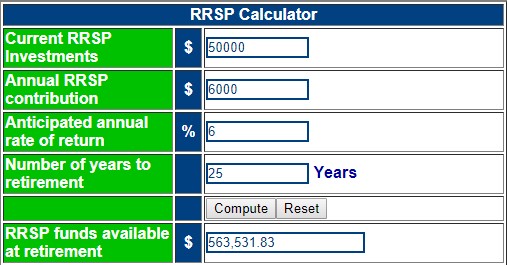 Here is what Lorraine’s TFSA could look like assuming she starts with a $5,500 contribution this year, earns 6% for her investments long-term, and the TFSA contribution limit grows with the rate of inflation (2%) for her contributions: 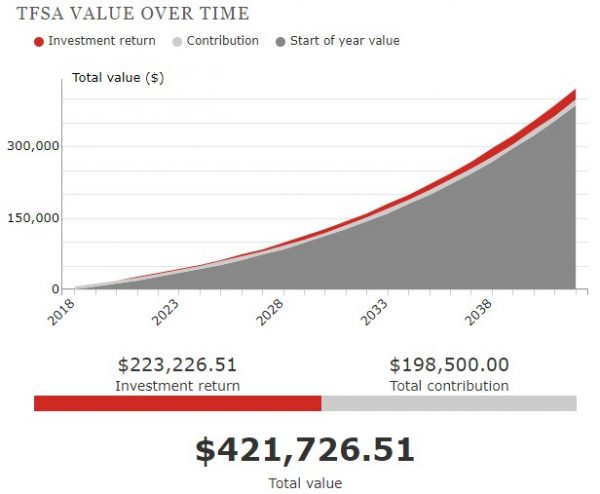 All RRSP and TFSA values approximate for illustrative purposes. For images above, you can find great, free calculators and tools here. References are on that page.

Sure, another example that’s short of a million dollars but let’s not forget I mentioned “or close to it”!   Besides:

Besides that, (Early) Earl and (Late) Lorraine have some government benefits to look to forward to in their golden years due to many full-time years in the workforce.  Those benefits will come in the form of Canada Pension Plan (CPP) and Old Age Security (OAS) payments.

With almost a million bucks in the bank they’ll have options for when to take their CPP and OAS.

So, after adding in CPP and OAS fixed-income benefits that should average about $1,000 per month in combined income at age 65 or so, even with some assumed million dollar shortfalls, I guess they’ll need to consider Airbnb for accommodations just off the Florida coast for a few weeks each winter instead of having an ocean view room. Tough life!

How to build a million dollar portfolio summary

Whether you are Early Earl or Late Lorraine or any saver and investor in between, I hope this post has emphasized you can have a very healthy retirement nest egg if you strive to do the following things more often than not:

My bet is, if you strive to maximize contributions to your RRSP or TFSA or both (ideally), by following 1-2-3 above you will likely have a million dollar portfolio after a few decades.

Building a million dollar portfolio can be a very tall order for many Canadians.

That figure will probably discourage some investors from trying at all.

My suggestion is not to let big numbers scare you from putting a financial plan in place.

Focus on those three principles above. In doing so I suspect, over many years, you’ll be rather pleased with your efforts.

For savers and investors striving to build your retirement portfolio – how are you doing that?  For investors who have already realized their financial goals – how did you get there?  Comment away.  I read every one.  Thanks for being fans.