The Dividend Growth Index is a fun project created by Mike over at The Dividend Guy. The Index is comprised of 8 dividend growth bloggers selecting 3 stocks each, for a total of 24 dividend paying companies in the Index. I think this is a great initiative. Unfortunately, one of our participants, The Wealthy Canadian, had to quit blogging for some personal reasons.  I wish The Wealthy Canadian all the very best and hope he returns to blogging at some point.

We’re now into our 2nd quarter and the results are starting to show.  My three selections for the Index are:

Let’s recap what these companies do, where their performance has been since my last update, and what I forecast going forward.  The screenshots below are courtesy of TMX.

In the healthcare sector, Abbott is a major player.  It is one of the biggest companies in the world engaged in the discovery, development, manufacture, and sale of a diversified line of health care products.

Last fall, Abbott announced plans to split off its pharmaceutical business into a separate publicly traded company.  Recently, Abbott announced the name of this new company:  AbbVie [pronounced Abb-vee] which is expected to launch by the end of 2012.  The name is derived from a combination of Abbott and “vie,” which references the Latin root “vi” meaning life.

Since my introduction of the Dividend Growth Index, Abbott has paid two dividends. Actually, Abbott has paid quarterly dividends since 1924.  A number of weeks ago, Abbott increased the company’s quarterly common dividend from $0.48 to $0.51 per share.  That dividend hike marked the 40th consecutive year that Abbott has increased its dividend payout and the 353rd consecutive quarterly dividend paid.  Most of my shares were purchased under $50 USD.  The yield very healthy and sustainable at just over 3%.  I won’t be selling this company.

If you can’t beat ‘em you might as well own ‘em.  Because a banks’ prime objective is to make money, by owning an established bank like Bank of Nova Scotia that pays a dividend that means you’ll make money too.   Scotiabank is one of North America’s premier financial institutions and arguably Canada’s most international bank, with operations in more than 45 countries outside the Great White North.  In fact, if you visited the Caribbean, Central America or Mexico for your sunny destination this winter (lucky you), you might have used a Scotiabank ABM to get some money out while on vacation.

Last time I wrote about BNS, I said it was trading closer to its 52-week low than high and that was good for me because I was a buyer via my dividend reinvestment plan.  I try to buy my stocks near 52-week lows, if not lower, and never sell them. If you look at the chart above you’ll see BNS is approaching it’s 52-week high.  Earlier this year, Scotiabank reported a 15% increase in their 1st quarter earnings and decided to increase their dividend by 6%.   The quarterly dividend rose from $0.52 to $0.55 per share for a total yearly dividend of $2.20 per share.  BNS is currently sporting a healthy and sustainable 3.5%+ yield.  I don’t intend to sell this guy either.

This company may be unfamiliar to some but it’s a player in Canadian healthcare space.  CML Healthcare operates 105 medical imaging centres in three provinces across Canada, including 75 locations in Ontario, 21 in British Columbia, and nine in Alberta.  Staff at CLC are responsible for performing more than 2 million medical imaging scans in Canada and 37.7 million laboratory tests, imaging that includes MRIs, CT scans and X-rays to name a few.

As you can see from the chart above, 2011 was a year of volatility for CLC.   Thankfully for them and investors, things look better in 2012.  For the 12 month period that ended in December 2011, revenue increased 2.1% to $376.1 million; cash flow provided by operating activities from continuing operations increased 15.2% to $119.7 million and adjusted funds from continuing operations increased 25.4% to $101.3 million.  So far, so good.  I will continue to hold this company.  CLC pays a monthly dividend and a very high one at that, yielding over 7%.

In closing, I’ve selected each company for a variety of reasons:

How have the holdings in the Dividend Growth Index performed?

Check out this table for detailed results: 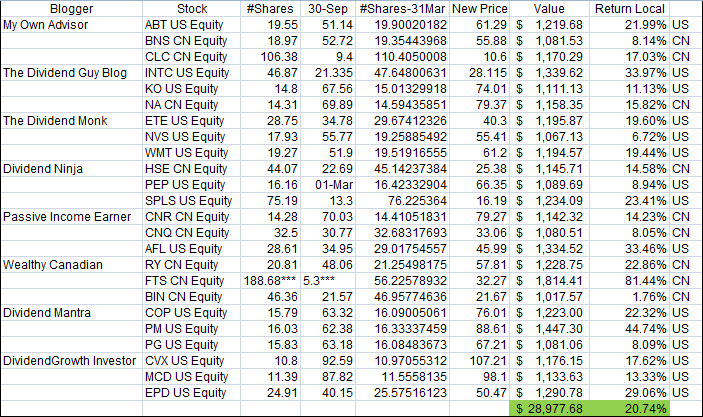 You can read about the other participants in the Index by clicking on their name below:

What do you make of this Index?

What do you make of my picks for the Index:  ABT:US, BNS and CLC?