You are here: Home Christmas Weekend Reading – $90,000 job or house, ways to save, cutting fees and dividend kings

Welcome to my final Weekend Reading post before Christmas…

Like you I’m sure I’ve been very busy at work and at home, getting ready for the holidays.  It will be nice to have a few days off.  I hope the same for you.

Earlier this week I said these are great times to be an investor – and we have millennials to thank in part for that.

I also got a chance to interview top personal finance rabbit – Robert Brown.

This article asked if you’d rather have a $90,000 job or owned a home in Ontario.  Guess which one paid more over the last 12 months?

Ben Carlson listed some rules of personal finance.  This one was tops for me:  “Get the big purchases right.”  Think houses and cars.  Forget the Latte Factor please.

Tom Drake listed some practical ways to save money.

BlackRock, the world’s largest asset manager, is cutting its fees on some products.

Boomer and Echo wrote about the power of inflation.

Don’t screw up as bad as last year.  That’s a good goal for 2017 according to Big Cajun Man.  I hope to achieve that myself.

John Robertson built a Canada Pension Plan estimate calculator.  I just found a home for John’s tool on Helpful Sites page along with other easy to use calculators and free stuff.

I fell for this clickbait, why this blogger wears shirts that has holes in them, uses coupons, and picks up coins despite the fact they make over $100k a month (yes you read that correctly) from their blog.

Michael James on Money disagrees with the concept of retirement, as we understand it today, is outdated.

Freedom Thirty Five Blog shared his balance sheet for 2016.  I used to share my net worth on my site but I share A LOT here so I would prefer to keep that private for now.

Family Money Plan wondered if you know your daily spending rate.  I don’t know it exactly, to the day, but I can tell you where our money goes every week or month.  This is how we budget and then we enjoy life.

On the flipside of spending, here is what I think the best savings rate rule of thumb is. “Saving 10% off your net income means you get into the habit of stashing the cash. Assuming you start with $1,000 in the bank, and your net income is more than $30,000 per year throughout your career, $3,000 per year saved for 40 years at a modest 6% rate of return will create a portfolio more than $500,000.”  That’s good.

This is likely my last post before Christmas.  I might post some articles here and there over the holidays, when the mood strikes, so stay tuned.  If I’m not online much over the holidays it’s because I’m enjoying my downtime with family and friends. 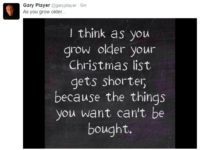 I wish you and your family a very Merry Christmas and Happy Holidays.  Thanks for being a supporter and fan in 2016.  There’s more good stuff to come in 2017.